Every year police forces up and down the country have an annual drink-drive campaign and each year the number of people stopped and found to be over the limit is an astonishing one.  Strathclyde Police reported that in the second week of its 2008 festive campaign some 80 motorists (65 men and 15 women) were arrested by its officers.

Driving having drunk alcohol is a rather stupid thing.  Many people who drink and drive know that they are over the limit when they get behind the wheel of the car, but do so out of complete disregard for the safety of others.  It is a selfish act which causes so much misery up and down the country every year.  Cars are lethal weapons whether people like it or not and as such should be treated with care.  Those who commit the offence of driving whilst over the limit are selfish people who deserve everything that the law throws at them.  Drivers should also remember that if they’re caught and convicted the ramifications of such a conviction have effects for not only themselves but those close to them.  Jus think about those consequences and if that doesn’t stop you then just think how you would feel if you killed someone whilst driving because you had drank.  If that doesn’t stop you then you are clearly a selfish individual who should not be driving a car at all. 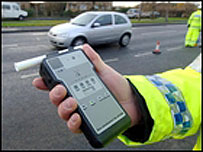